hang from any direction...things will move, marbles roll, eyes jiggle...

9th Premise: For every action there is an equal and oppostie reaction: Physics = Karma

My obsession with boxes began in childhood. I was always a fan of dioramas as well as the shoeboxes with scenes inside.  Once, I came across my mother's vintage ViewMaster, and with the few slides she still had, I was hooked on the idea of creating places for escape...being the only child in the middle of a divorce was no doubt a contributing factor in my need to escape.  Whether reading books or looking through a ViewMaster, I was always on a quest to improve my personal narrative.

Discovering Joseph Cornell's amazing art brought me to the next level.  His use of old cigar boxes, each one presenting its own unique tableau-narrative, from  scraps of old maps and star charts used for backdrops, and including otherwise discarded trinkets, branches, dolls, glasses, bottles, jars, marbles, bird cuts-outs from an old book, and Cornell did not just use cigar boxes; any box that could become home to his storytelling would suffice in becoming frame to to the repurposed and recycled materials that he used to create his worlds, all nicely contained within Boxes, and so I began to learn how to capture my own magic-in-a-box, my great escape, finding imaginary places to exist that were better than the reality of home.

Kit Williams and his incredible artistry, mixing his skills as a storyteller, a woodworker--with his exquisite marquetry work--and painter encouraged me to explore mixing my media, beyond my basic collage.  The mystery treasure hunt narrative-myth he created in Masquerade, that with clues left on every page, in his beautiful art and text, actually led to a fantastic buried treasure of a precious jeweled rabbit, messenger to the moon.  I was swept away by how he interconnected all these forms of art into a beautiful quest.  Kit Williams' other work, including making orbs to peer inside, or parts that move because of airflow, as well as a Chariot, have undeniably influenced me, and my he'art.  What's more, Mr. Williams has done this all Out of One Eye.

Once I'd discovered Irene Rice Pereira and her layered glass with painted lines, not to mention she was also a poet and a philosopher, I was able to consider that it is possible to put forth concepts and ideas without sacrificing beliefs, not to mention succeeding in unchartered territory for women.

Now it's the female artists who have taken over unchartered territories, creating performance art, tableau, and mixing media either in new ways, or like never before combined.  San Diego based artist Gwyn Henry is one such female artist, creating her "moving image poems," including the short film we did together, "Her Chariot, Her Self," as a part of the Ekphrasis public television mini-series, Creative Collaborations.  I actually had the opportunity to work with Gwyn on several projects, especially as a participant in her Movement Artists Ensemble (MAE), from which she would create her "moving image poems," and it was an honor to learn from her all that she had to impart, especially in the experience of what EKPHRASIS means, art inspiring art inspiring art: Recursion. Participating in the creation of art that is regenerative makes it apparent that art really is all about process, with the end product the result of the process, for better or for worse--the process is what is important.   I make art because I am compelled, because it offers me mental peace, and because it connects me to others.

By the time I made Shelah's Orbital BeBop (named after my mother), I was carrying out a long-dreamed of box that would be like an entirely different place to be experienced by looking inside.  It is one of my favorite pieces for the reactions it received while on display.  One viewer expressed how the experience had made her feel like she was having a private moment full of happy nostalgic memories.

Inside, there are two parts that move, including one that requires being wound up.  Once again, I repurposed parts, an old wooden tissue box cover, a ballerina topper from a birthday cake, a clock.  I have longed to return to making more pieces like this and have many ideas to move forward with, soon. 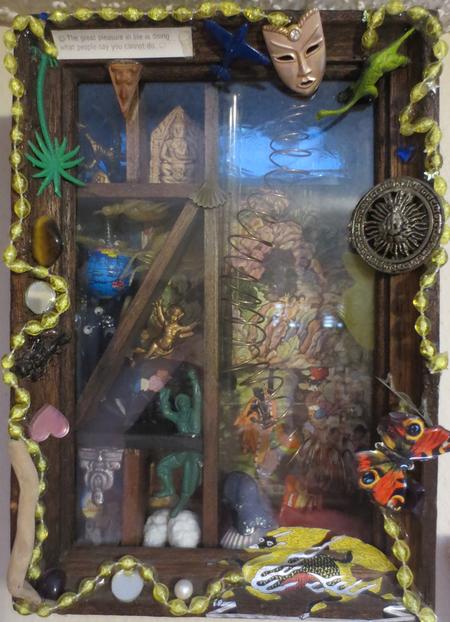 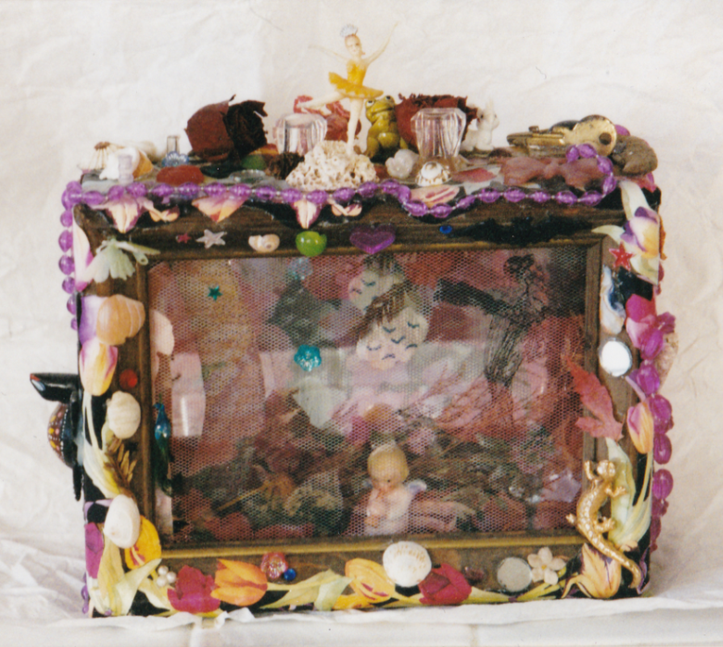