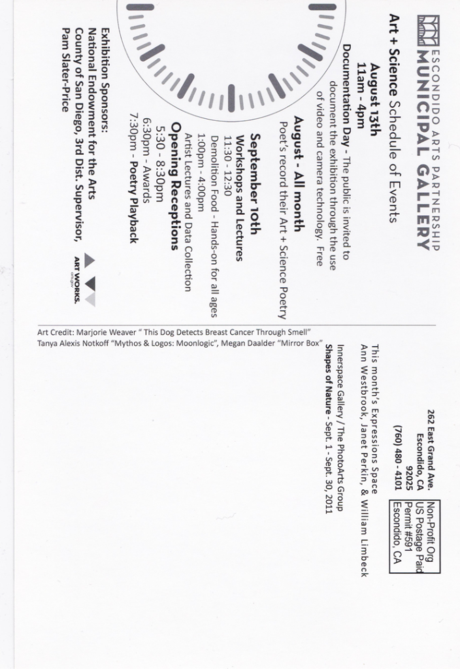 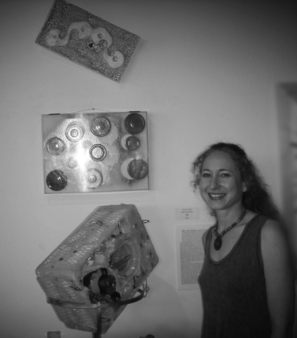 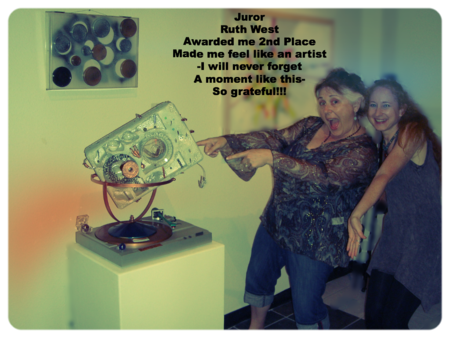 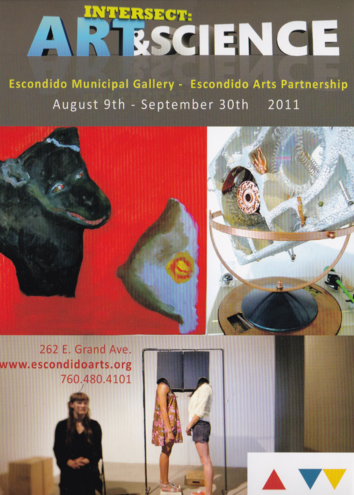 Mythos + Logos: Moonlogic exists somewhere between wanting to pay homage to those ancient mechanistic inventions and early models of the universe (Astrolabes) and my favoring the use of recycled materials and components.  One day, I aspire to learn how to build mechanical devices (maybe even a Rube Goldberg apparatus), but for now I must rely on movement, light, and sound that can be achieved through the use of pre-existing mechanisms.  On the other hand, through a sense of curiosity to produce a kinetic sculpture, I hope the “Phases of the Moon” component will use the vibration of outside traffic to create some movement on its own.  Whereas, the “Wave” may or may not have to be manually turned (call it a study in balance) and the “Moon” absolutely must be manually manipulated.
In fact, this piece brings together some of my past artistic explorations such as a small compartmentalized wall-box  I once assembled while studying William Blake that was meant to be rotated and displayed four ways with parts inside that would shift when turned, including rolling marbles in wire coils (wire coils represent wormholes/rabbit holes). Also for “Moonlogic,” I drew from my past work with oil pastels to interpret physics/astronomy (e.g. nebulae, singularities, particle colliders), although much of the galactic outcome is unobservable without removing the turntable base.  Furthermore, I have a fondness for using toy astronauts in my art; it is rather an obsession.  I strive to capture the idea of astronauts floating in space, that sense of perfect detachment/attachment so that the universe is the womb.  I have always had a strong desire to convey through both my art and my writing that sense of peace that is achieved when the rest of the world is asleep in the late night/early morning hours, and with a music to match that includes Aimee Mann’s “Lost in Space,” Nick Drake’s “Pink Moon,” Röyksopp’s “Melody A.M,” and the soundtrack to “Diva.”  While I would have liked to have been clever enough to figure out how to play the music as part of the display (harmony of the spheres), in the end I was pleased to discover the slight noise of the spinning elastic which is reminiscent of the cosmic microwave background radiation as it is found in radio static.
As for the moon itself, while I can’t remember what was packed in the styrofoam,  I recall being instantly struck by the various moon shapes in the form, so much so, that I’d kept the piece all the years, hoping to fully render its moonness and moreover, its mythos, the lunar logic (logos).  For me, the early Greek concepts of Mythos and Logos naturally applied to the topic of Art + Science where Mythos is Art and Logos is Science.  Of course to really understand the concepts of mythos and logos, one must consider the origins of the words, because the definitions were switched somewhere between Plato and Aristotle, along the same time that (as I understand it) Plato joined the parts to create the word mythology and the word Mythos which used to mean “truths” switched places with the word Logos which used to mean “lies.”  In a word, Aristotle’s mythos as it appears in his Poetics means “structure.”
Finally, as I began to consider the subtitle for this piece, I found myself in deep consideration of what moon-logic would mean.  I considered the title Moonlog, but that led me to Monologue, which as it turns out, does not appear entirely accurate when taking into account that these really are dialogues that are taking place in our universe: ebb and flow, magnetic and dynamic.  In the end, it really is a moon myth, all about imagining.  As Einstein said, “Imagination is more important than knowledge.”
And just maybe, really, the Universe Is A Green Dragon…

Megan Daalder's "Mirror Box" is also an interactive art piece, somewhat of the psychological realm, social, too.  Basically, two people, best not well-acquainted (if acquainted at all), and with each person on their own side of the glass, in this "box," the lights and dividing glass/mirror bring the observers/participants "eye to eye" so that you are seeing your own reflection "super-imposed" over the face of the person standing opposite you.  I tried this out with another artist, Betty W., and I must admit, it was quite the emotional experience!  Discovering Betty had breast cancer, after the "experiment," gave me a link to Betty I have carried since, especially as she too lost her battle with cancer, as had my mother.  Betty touched my heart and Megan's "Mirror Box" was a most amazing experience she transported down to us from up north--so worth it!  You don't forget those connections, or an interactive art installation that can produce such deep emotional reactions.

I knew what it was when I saw it –
Laying it out for the juror
I knew whose it was,
Instant recognition of painterly style and subject
Marjorie’s sweet animals
But this one was different,
Gifted.
Confirming, I turned the painting over and read the title:
“This Dog Detects Breast Cancer Through Smell”!
Her appreciation of the dog’s gift
To us, to learn, to detect, to warn
Sniffing out the budding
Threats of Time-lapsed decay
CANCER, BREAST CANCER
ENCROACHING.  CO-OPTING.
Marjorie captures the amazing feat,
Woman’s best friend provides
Diagnostics, more timely than the M.D.
Cancer smells!
Don’t I know it.
I learned this first-hand,
Witness to my mother’s demise,
Her breast cancer, full-blown
After four years and failed treatments
An ending near, the tumors had
Boiled up to the surface:
Cutaneous Metastatic Tumors
All along the scar lines.
No dogs were ever present.
It is a smell that lingers,
Most unpleasant olfactory recall.
My memory, my keen sense
Now I know, and I’ve recognized it –
Once on a friend, once on a stranger
But what does one say and
Am I part dog?

I was a volunteer the day of jurying with Ruth West, and my job was to help lay out the pieces she was selecting to include in the show, as well as determining the winning pieces, but I wasn't allowed to say anything about my piece...at first she placed an Honorable Mention, which thrilled me to no end, as I had only been showing for a few months, and this was my first award.  However, by the time I went into the bathroom to dance my jig (since she was still judging, and I was bursting), she'd changed her mind, and there was "2nd" next to "Mythos + Logos: Moonlogic"!!!

This Art + Science show was one of my favorites at EAP, and I was one of two who arranged the show layout, and we were so happy with the outcome.  On opening night, Ruth was there, and I convinced her to take a commemorative photo for me, marking a truly momentous occasion in my life, from having come out from under an oppressive and abusive former marriage to showing my repurposed materials art, and winning my first award.  It seemed to me that the Universe was definitely telling me I was moving in the right direction.  Thank you Ruth West for participating in my re-naissance.

We were asked to write an ekphrastic poem for the show to be included in a catalogue, but the catalogue never materialized.

BARC! is the poem I wrote about Marjorie Weaver's 1st Place winning painting, "This Dog Detects Breast Cancer Through Smell."