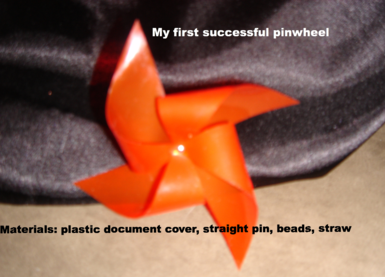 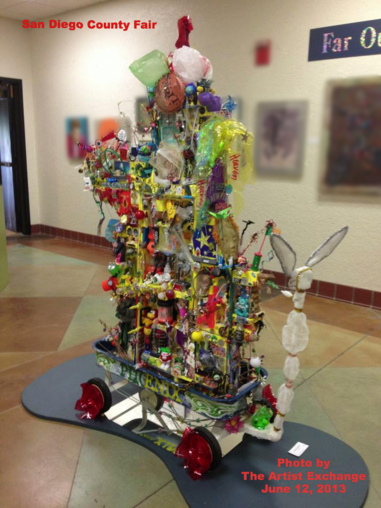 Her Chariot, Her Self:

It's really true that "one man's trash is another man's treasure."  From my own childhood Halloween bunny ears to discarded baby rattles, toys, party favors, and other miscellanea that would otherwise be garbage, I found the styrofoam core was a perfect base for attaching these trinkets.  I had no idea that when I finally placed the body in the Radio Flyer base and sent Her Chariot out into the world, she would have as fantastic an adventure for Her first incarnation...the second is forthcoming, especially after she took a topple in the back of the moving truck on the way to the County Fair.  While she was repaired for showing at the Fair, Her Chariot is now ready to be Rêve-Amp'T. 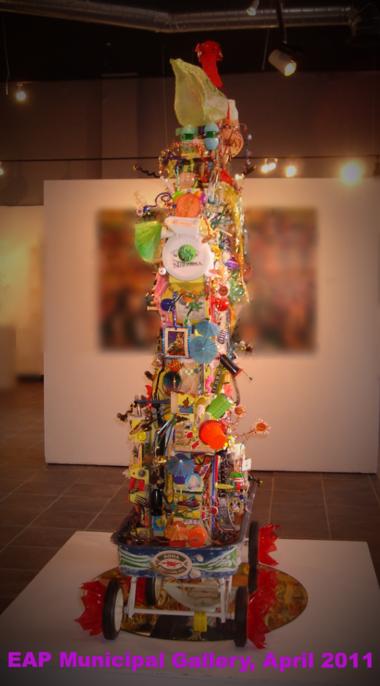 8th Premise: Choice is an illusion.

“Her Chariot” – An Assemblage Artifact
The question I am asked most often about “Her Chariot” is in regard to how long it took me to complete the piece--A very long time.  I began working on the piece in mid-2004, on and off throughout the years up until early 2011.  However, even this would be an easy answer, for I have found the construction and interpretation of concepts applied to be complex and deeply rooted.  It’s as if I were trying to sythesize a collective universal mythos of the “stuff” I’d been gathering since childhood (mental as well as physical)—over four decades worth and most certainly consisting not only of my stuff.  “Her Chariot” is a “multi-narrative” that contains as many stories for as many people as there are trinkets, symbols, and myths.  She appears to be on her own timeline.
It is my intention that “Her Chariot” should be a ride for the audience, a vehicle of sorts.  The piece is actually designed to be interactive and many of the parts move, especially when the wagon is pulled.  Remember your own wagon, perhaps, or other favorite toys, past-time adventures—a day at the fair, the beach, or maybe a rollercoaster ride.  Recall your favorite sweet treats, including the packaging.  Or what about catching sight of a beautiful rainbow after a storm.  How about those voyages to distant lands that you have always wanted to take…  Sometimes “Her Chariot” reminds me of a map or a chart, even a clock; it’s also a boat, a ship, a “Yellow Submarine.”  I think it may even be a time machine.
There is, however, a dark side that may not be peeled away from the fancy-free: the nightmare reality that is the flipside to the Carnivalesque and fantastic, such as Death.  I lost my mom to breast cancer when she was fifty-five.  Every day, I am grateful to have known her for the time we had.  She is celebrated in this piece, honored by the pink “breast-cancer” constellation and the dancer on top.
Relish the moments, the experiences, and moreover the people.  We are too quick to throw away what appears old and worn, but there is so much to gain by preserving and remembering.  “Her Chariot” is mostly a reminder to dream and to honor those dreams—they are gifts.  Enjoy the journey.  Eat some candy.

“Her Chariot” first went on display on Friday, May 13, 2011, for the Escondido Arts Partnership Municipal Gallery’s “Contemporary Realism” show.  After the show ended, "Her Chariot" remained on display in the back galleries, where Gwyn and I filmed--a Big "thank you" to EAP Executive Director Wendy Wilson.  During this time,  a new home was sought & located, which as it turned out was just down the street at Timekeepers in Escondido (with special thanks to Timekeepers owner Burhan Kivrak), one of the coolest stores in Escondido, full of the most amazing plethora of clocks and more.  You can lose yourself in there.  My kind of shop!

From Timekeepers, "Her Chariot" rolled next door to Swirlz Candy and Novelty Emporium.  A Very Special Thanks to Maribel and Richard Moran for providing an opportunity for “Her Chariot” to remain on display in their store window, from 2011-2013.  In June 2013, "Her Chariot" made her way up to the County Fair, running from June 8 - July 4, where she was seen for the last time in San Diego, CA.  Having suffered a decapitation on her way from Escondido to Del Mar, HC was repaired in time for the Fair, to be seen by thousands, a fitting departure from her native California.  "Her Chariot" now resides in Colorado, awaiting her grandest makeover, yet.

The exquisite short film “Her Chariot, Her Self”  by Gwyn Henry was featured on Episode 5 of the six-episode public access series “Creative Collaborations,” produced by John Wolf and Jim Beck, focusing on Ekphrasis: art inspired by and about other art, including poetry and film.  The second half of the episode features an interview with Gwyn Henry and myself; we comprise the entire episode.  Thank you John Wolf and Jim Beck, and of course Gwyn Henry for creating the film.

"Her Chariot" really is all about Infinite Regression and the Observer as part of the Observed.  She was my reconnection to the world and I am grateful to all those who were a part of the recursion, ekphrasis, and journey (and a special  thanks to San Diego artist Jon-Loren Bazan who helped me safely deliver "Her Chariot" to the first destination and then filmed Her Chariot's rolling journey from EAP to Timekeepers).  Happy Trails & Bon Voyage.